Elmhurst, like most other neighborhoods in Queens, has a large Filipino population (this morning I noted a flyer seeking a roommate with the stipulation “Pinay only” in a laundromat near my apartment) and you often hear Tagalog spoken on the street. But in local stores, you may hear a language that sounds similar to Tagalog, but that is actually a relative—Indonesian. Both belong to the Austronesian family, a language group that spans much of Southeast Asia, from New Zealand to Taiwan (where the greatest diversity of Austronesian languages exist), with satellites in Madagascar and the Easter Islands.

There are several thousand immigrants from Indonesia in New York, and probably the greatest concentration of them lies in Elmhurst. One of the country’s famous Indonesian restaurants, Upi Jaya, is in Elmhurst. And, naturally, there are some Indonesian grocers in the neighborhood.

As a diner I am working my way toward Elmhurst, but I decided to try cooking from one of these grocers today. My greatest hope was to find a durian, a fruit that is noted for its supposedly delectable taste and putrescent odor and that is popular in Indonesia. But short of that, I at least hoped to find the ingredients for a stir fry.

I tried two stores, Indo Java and OK Indo Food Store, and neither had any fruit at all—they both sold only spices. Probably most other ingredients can be found at New Golden Sparkling, along with foodstuffs from everywhere in East Asia, so these Indonesian grocers dedicate their scarce shelf space to hard-to-find spices. 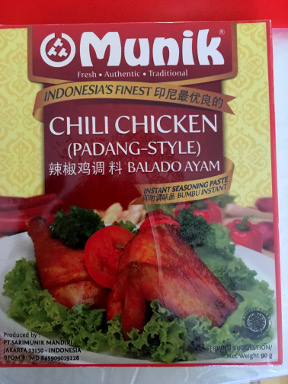 I had not really done my homework for the stir fry. I don’t know anyone who would be likely to have good Indonesian recipes, and I don’t have any Indonesian cookbooks. So I asked the fellow at the store.  He handed me a packet of Padang-style Balado Ayam, an Indonesian instant seasoning.

“Cook your meat first, and then add this.”

I diced by vegetables and peppers, sliced my chicken, added sesame oil, and fried. Then I added soy sauce and this Balado Ayam.

The result had a surprising tangy flavor under the considerable spicy bite. I suspect there was a good deal of tamarind in the Balado Ayam. There were also many mellower spices at work. It may not compare to Upi Jaya, but it was very good.